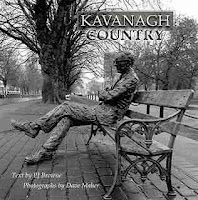 The perfect conjunction of genius has come together in this book: Patrick Kavanagh's poems and a little prose; a sensitive and learned introduction to Kavanagh and his work by PJ Browne, the photographs of David Maher, and the design of Syd Bluett.
David Maher is a sports photographer, whose pictures every week capture the moment of triumph of despair. But here, he photographs stillness: on the cover, Kavanagh's statue on a seat by the canal, deep in the meditation of composition. Or maybe terribly hungover.
Horses grazing in a mist-shrouded field, a postman wheeling his bicycle up Raglan Road, tufty grasses, a half-broken wooden farm gate, a statue of the Virgin railed off, a ladylike Grafton Street - the photographs in black-and-white enrich the poems without outsmarting them.
The introduction understands Kavanagh - his hunger for poetry, his small-farmer mentality, his acerbic Catholic Standard film reviews, his arrogance and kindess - without patronising him.
The layout is the best I've ever seen - utterly understated and graceful, the photographs perfectly chosen for each poem, the typeface exactly right to give the poems their voice, the titles - in large and small upper-case - gently exact.
And the poems... Raglan Road, The Great Hunger, Lines Written on a Seat on the Grand Canal, Dublin - to read them again is to learn them anew.
At the back are short notes on each poem - the place and circumstance of their writing, fascinating.
If you can get this book, snap it up. I hear there are a few copies left in Dubray.
Posted by Pageturners at 10:22 No comments:

A Preparation for Death by Greg Baxter

GLOOMY and hilarious, Greg Baxter's mocking novel about a failed novelist (himself, in a wryly-created version of the dank Dublin bedsitter life of the exiled American artist) will have you whooping as you reach for the Luger to end it all.
He lays it all out at first: the arrival in Dublin, crushed by failure, his acquisition of a job teaching creative writing (no! not that!) in the Irish Writers' Centre, his smothering, humiliating memories.
But it's not long before he opens the gun cabinet, with a rib-busting, vicious description of a session of the Sewanee writers' week, carefully calibrated with the use of forgotten, once-famous writers.
"A group of white-haired and weathered figures were standing around looking like Southern writers," he writes, sharpening up his stiletto. "If you've ever seen a group of them together, you'll know what I mean. The closest I can come to describing it accurately is a highbrow and slightly effeminate fishing trip."
It was at this stage that I actually put down the book and laughed out loud.
Baxter has a killing eye for the telling detail, and watching him poking fun at the writing scene is like watching a horrid, intelligent little boy poking hopefully at the corpse of a putrefying lizard with a pointy stick - what can you do but snicker.
His mentor, it soon turns out, will be Barry Hannah - a fabulously typical character: the novelist as liar. Barry is in the middle of chemo, and eats only pink stuff through a straw. But when he drags Baxter off on a search for a burger, mitching from the conference, Baxter - blind as a bat - ends up driving them along the country roads, and is gobsmacked when Barry meets a coven of rednecks, moustachioed and survivalist, inspecting their Stars and Bars and ammo and reliving their defeat; Barry, whose books are awash with moustachioed Deep South villains just like these, agrees vociferously with their hogwash. Aha, so are all his promises of publication for Baxter lies too? Mm? Hm? Mm?
From this villainy Baxter delves further, into the death of his grandfather, a Waffen SS man, and his grandmother's marriages of convenience - material any writer would give his right ear for, of course - and we're back to the flat in Dublin, now shared with an Icelanding playwright for whom everything is part of her stories.
Anyone who's spent any time in the horror subgenre of writers' retreats and hope will love this book, or else find it so terrifying that they run for their life.
Terribly funny; perhaps too sharp for anyone but the brave.
Posted by Pageturners at 08:54 No comments: 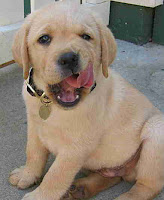 Back in the day, I took a morning off and went into my bank, Allied Irish Banks, to borrow some money.
I had a loan of £15,000 from Dublin Corporation to buy the inner city cottage I was living in, I told the executive.
He hadn't invited me into his office but was leaning an expensively-clad elbow on the mahogany counter and desultorily leafing through my account details and cancelled cheques, which he had brought out with him.
"Why do you want to borrow this money?" he asked coldly, emphasis on the 'borrow'.
"The Corporation want me to rebuild the kitchen and bathroom to meet their standards, so I need another £3,000," I told him.
"You should have saved the money up, in that case," he told me. "Your account shows you as quite unreliable."
I was indignant. I don't think I even had an overdraft; money went in and money went out, but the balance stayed steady.
Apparently the problem was that I tended to cash my cheques in pubs - as people did in those days. I wasn't a drinker; a glass of Guinness or a Coca-Cola was about my limit. But the bank hours of the time - 10am to 3pm with a generous lunch hour during which they closed to customers - made it impossible for those who worked all day.
"But... but..." I stuttered. I'd been led into that very bank - then the Munster & Leinster in Grafton Street - at the age of five to open my first account. My great-grandmother, grandmother and mother had all had accounts there before me, reliable women all.
He told me with a lifted lip that neither factor had any bearing on the bank's likelihood of lending me money.
Off I went back to the office where I toiled in misery at the time.
I had another account that I used for savings, in the TSB as it was then. I rang them up (conscientiously tearing up a stamp so my State employer would not bear the cost of my private call), and made an appointment to see the manager.
The TSB at the time was a tiny Dublin bank. Their ads, causing tearful scenes in cinemas and homes, showed an old lady tottering into her bank with an equally elderly golden labrador. Called into the manager's office, she attaches the dog's lead to the umbrella stand outside - and the manager opens his door and leads the dog inside.
But the TSB really was like that, then. "This looks grand - we'll see if we can get it past Head Office," the manager of the nearest branch told me. I got bridging finance, got the kitchen rebuilt, bought the house, and paid back the TSB loan, and the Corporation loan.
I borrowed again, this time to buy a roomier three-bed semi. The full loan was from the TSB.
A few years later I was working in the Irish Press Group when it collapsed. I spent three months as office manager for the chapel and journalists as we tried to find a new buyer, then the usual fortnight or so of blinded terror and grief that follows losing any work, then made an appointment to see the bank manager.
I was shown into the manager's office, clutching my mortgage documents and a list of direct debits, and so on. A new manager - I hadn't met this one.
After introductions, I gulped, and started: "Well, as you may know, I was working in the Irish Press."
"Now, pet," said the bank manager, "will you sit down and have a cup of tea and a biscuit, love?"
He looked calmly at the figures, and suggested that the bank give me a year's rest on the mortgage payment, until I'd get back on my feet.
I walked out of there on air - knowing that the year's respite would buy me time to find other work.
The very best thing was knowing that my bank was at my back, defending me against the trouble that had come against me.
A few years later the bank was sold to Irish Permanent. Another manager told me that the staff were getting a nice payoff, and that this was scarcely fair - the shareholders were us, the customers, and we were the ones who should have been paid. I didn't mind; it was good that such decent people were getting their reward.
Posted by Pageturners at 09:35 1 comment: