The Behaviour of Moths by Poppy Adams 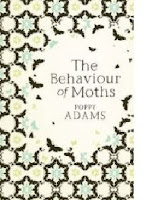 Virago
PUBLISHED as The Sister in the US - where perhaps the dissertive title wouldn't go down so well - this book has the kind of power that reminds you of the scene in Close Encounters where the giant ship comes rumbling over, the size of a town.
Ginny is aged and crippled with arthritis, but secure in her fame as a lepidopterist. Long ago, she made breakthroughs in the study of moths which won her worldwide fame.
Maybe.
Everything in this story by young documentary-maker Adams is mutative, scientifically observed, yet open to doubt.
Ginny's adored sister, who left years ago, has returned for an unknown purpose.
Vivien fell off the clock tower and ripped her womb, so could never have children; Ginny carried her baby.
In one of the most beautiful scenes, Ginny, crouched to watch the graveyard where her sister is paying court, sees a nest of frantic ants.
Probing with a finger she sees a larva, which has interfered with the ants' pheromonal signals to turn them into robots servicing its needs. She covers the nest.
"It might seem a hideous and ruthless creature now, but in time it will emerge transformed into a stunning iridescent blue butterfly, one of our rarest and most beautiful, and will be greatly admired as it shimmers in the sun with no knowledge or burden of guilt for its obscene past," she muses.
Excuse me. A little tired. Couldn't stop reading till I finished it at 3.30am. What a story.
Posted by Pageturners at 11:10 No comments:

Confessions of a Demented Housewife by Niamh Greene

Penguin Ireland €14.99
DITSY housewife Susie Hunt is still in the maelstrom of life. She's praying her lovin' man Joe won't find out about her dalliance with the mystery man known only as Lone Father.
She's practising to be birthing partner to her friend Louise, whose love rat partner has scarpered. Louise ricochets back and forth between being a breast-is-best earth mother and putting the kid up for adoption.
And Hollywood couple Anjelica and James Law have relocated to Dublin and their son is in school with Susie's daughter.
Simple enough. But this being Niamh Greene-land, complications are about to start. Soon Susie is in the midst of a web of lies.
Her mother-in-law, Mrs H, mustn't find out that she has a gay son (not Susie's husband, Joe). He, meanwhile, mustn't find out what a hames Susie has made of the family finances.
And that's just the start - by the end of Greene's hilarious romp, Susie and Anjelica are hiding indoors, being stalked by paparazzi, while Joe dishes out the canapés to the paps.
But all Joe really wants - apart from a career as a celebrity chef - is another baby. Unlikely with Susie in a high-powered (but low-paid) job in the movies.
Then there's the sharply-dressed Mafia menfolk arriving from Italy with offers that can't be refused.
Great fun from Indo writer Greene, and sure to be another bestseller.
Posted by Pageturners at 11:03 No comments:

The Ice Princess by Camilla Lackberg

IN AN ice-crusted bathtub, her lips blue, lies the Ice Princess - Alex, the beauty of the fishing town of Fjallbacka, her wrists slit.
The handyman who finds her body rushes straight to the nearest neighbour, professional writer Erica, to phone the police.
So far, so unremarkable. But Camilla Lackberg's story is more than a police procedural.
It's odd to find such warm-hearted, ordinary characters in a thriller as we have here. Everyone is human, in their kindness or unkindness or even psychopathy in one case
Erica was once Alex's best friend, and now she decides to write Alex's story. She - and the shy policeman who has always fancied Erica - discover that Alex had secret contacts all over the town.
One is a brilliant painter, a wino, son of the woman who cleans house for the aristocracy of the town of Fjallbacka. He is the obvious suspect for the murder. Until he turns up dead himself.
Meanwhile Erica's love life is taking comic and sweet turns - but I won't spoil it by saying how.
I couldn't put this book down, and at some points in the bank holiday weekend was rushing helplessly between the compost I was riddling and The Ice Princess, unable to abandon either.
Brilliantly plotted, this is a big hit in Sweden - to the extent that a Google search for Camilla Lackberg brings up many torrents of the TV version of the book.
Posted by Pageturners at 10:39 No comments:

Figures in Silk by Vanora Bennett

SILK weaver's daughter Isabel Lambert is crying with rage and humiliation in church when she meets a mystery man.
"You have to marry as your circumstances demand," he points out to the girl who's being made to accept the match chosen by her father. "You're young. Take the long view."
So she does. She marries - happily - she learns her mother-in-law's trade, and she becomes a businesswoman.
Then she becomes the lover of the most hated man in English history. (No, not Cromwell. The most hated by the English - Richard III, the man blamed for killing the Princes in the Tower.)
Vanora Bennett packs her books with research - she wrote Portrait of an Unknown Lady, about Thomas More - and here she's writing about the nasty Tudors and the period when England morphed into what would become the British Empire.
Isabel's adventures in the silk trade are fascinating. More fascinating than her love affair with the man she calls Dickon, by a long way.
The attempt to subvert Venice's control of the silk trade by importing weavers to work secretly in London, the poaching of jealously guarded trade secrets - this is fascinating stuff.
The book is less successful than it might be, because Richard is very gradually revealed as the creep he is. Human nature being what it is, readers mostly want the true love to be true and lovable.
On the other hand, a really dastardly villain is good fun too.
Posted by Pageturners at 10:33 1 comment:

Wolf Totem is the second biggest seller in China, after Chairman Mao's Little Red Book - a genuine publishing sensation.
This ecological love note is the story of a student in the 1960s who flees to the Mongolian grasslands with a work group made up of the sons of capitalist-roaders and dissident academics.
There he learns that the world is in balance: the wolves hunt the herders' sheep, and the herders the wolves - but the herders also preserve the wolves.
As the boy magically floats across the deep snow on a boat of felt to rescue a gazelle, survivor of a massacre by wolves, he curses the wolves.
His elderly Mongol mentor is furious. If you left the gazelles to eat all the grass, it would be gone and there would be nothing for sheep, gazelle, human or wolf, he says.
Forty years later, the Chinese have moved in on the grasslands and their sheep have grazed it away, and they have shot and poisoned the wolves and eagles, and rats have bred in millions.
As he sits in Beijing, now a professor of economics, a dust storm comes flying in - the dust of the lost plains, their grass eaten away after an ecological balance of thousands of years was destroyed.
Everyone should read this book.
Posted by Pageturners at 10:25 No comments:

Take a Look At Me Now by Anita Notaro

Bantam
WE LIVE in a country of secrets. Happy families that have a dark unconfessed undertone, sunny smiles that hide desperation.
In TV director Notaro's new novel, Lily Ormond doesn't know much about her twin sister's life. She thinks she knows everything, but when Alison drowns on Sandymount Strand, Lily takes up the strands of Alison's life.
I wonder how the publishers managed to publish a book whose title is so similar to a current bestseller - Cecelia Ahern's If You Could See Me Now. Is there not some subfusc title clearing-house to stop this?
In this eye-widening novel, Anita Notaro explores the life of an expensive prostitute.
Unknown to her twin, Alison had supported herself and her child by having sex with high-paying clients.
As Lily contacts the customers Alison has listed - for what Lily thought was a Wicklow beauty salon - she meets one man after another. Then she finds slinky silk underwear and champagne laid away in the lamplit back room. It takes her a long time to understand what was going on.
She thought she knew Alison. But Alison had a secret life, a secret face.
Separately, Alison and Lily's controlling father's will appears as a deus ex machina. He'd left a hefty trust fund, to come into operation if there was a grandson.
As Lily explores the call-girl underworld she's also working out whether she can take on her adored nephew.
Take a Look At Me Now is a pageturner, taut and heartwarming and full of surprises.
Posted by Pageturners at 10:15 No comments: