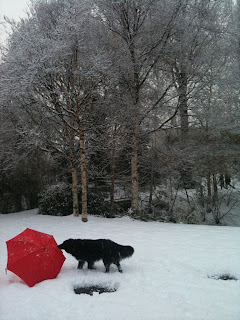 THIS is Bríd, an old lady now, her spine raked with spurs so that she can't race and play as she once did. But still the same sweet, kind nature, the same naughty playfulness, the same sense that she is the guardian of the household who must sleep in the place best sited to guard those she loves.
And superdog.
Bríd is a dog of language; she understands a surprising amount of what you say. I first copped this when she was a pup of around nine months old.
I have fairly nasty asthma and spend a lot of my time sick, and Bríd is a hairy girl. There was no way she could be allowed upstairs if I didn't want to suffer from the effects of her shedding. At the time I was minding Luna,  a cat for an American friend who had re-re-re-emigrated, and Luna lived mostly upstairs; despite Luna's own furry generosity, she was homeless; what could I do.
Bríd's ambition was to make friends with Luna, and have her as a plaything playmate. Luna's was to have a peaceful purry life without more than a courteous touching of noses with this bounding pup.
So there I am hoovering around the living room, and chatting away to Bríd in an absent-minded way, sometimes singing along to La Mer or Boum, sometimes just maundering on, as you do when a pup is dogging your footsteps. And I said those fateful words:
"Wonder where that pussycat is?"
Bríd laid her ears back and gave me a thoughtful glance. She switched her ears forward again - and with tail going like mad, she ran out to the hall and put her forepaws on the bottom step, and peeked up the staircase.
I was gobsmacked. I hadn't made any gesture, anything like that; it was purely the word 'pussycat' that she'd responded to.
A few weeks later, another job having gone from under me in the collapsing employment scene of Irish journalism, I decided the hell with it, I was going to spend recklessly on petrol and drive out to Greystones for a walk.
I drove out, we walked up and down the almost-deserted beach, I lay down with a book and tried to read for a bit while Bríd nestled against my side, but it was a windy day and I got tired of spitting out hair and sand, and said the hell with it again, and got up and went back to the car.
And found that I'd dropped my keys.
I looked at the expense of the beach, tried to work out where we'd been lying, made my way there and looked hopelessly at the empty sand.
Bríd was romping in and out of the waves and galloping around. I turned on her and gave her (natch) dog's abuse, telling her that we couldn't drive home if we didn't find my keys. "Where are they?" I cried wildly. "Find the keys! Keys, Bríd! Keys!" I wasn't, of course, expecting any action; this was purely relief of spirit.
But Bríd looked keenly at me, looked keenly at the sand, started nosing around, then digging, and up came the keys.
Never was a dog so praised or so proud. Mind you, her genius (apart from understanding every word you say) has failed to show up much in recent years; she hasn't found any thousand-euro notes, say, or chosen the right Lotto numbers (though that may be because I don't actually buy Lotto tickets; my fault, really).
But still. Bríd, Dog of Genius.
Posted by Pageturners at 10:11 3 comments: