Solar panels - why not get together on them? 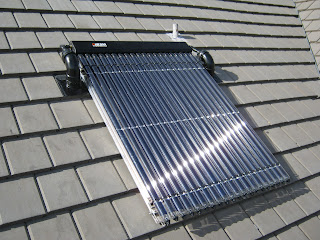 One of my buddies was telling me the other day about her friends, an electrician, a plumber and a marketer, who were made redundant just as the Celtic Tiger's claws fell out.

There was a grant at the time - with the Green Party in government as they were then - for putting in hot water solar panels. It wasn't much of a grant, but it gave people an incentive and lots of households were installing the panels to get their water heated for free. It looked like an opportunity to avoid emigration, which was the friends' only other choice.

So the three friends got together and formed a company to instal the panels.  They pooled their redundancy money, started marketing and started putting in panels on houses all over their locality. They were an instant success: reliable, reasonably priced, honest, fast. The order book filled up in no time.

Then the new government, under the evil aegis of the Troika, withdrew the grant. The orders dropped away in a few days, and the three friends were out of a job, and had lost all their money.

It's kind of insane that Ireland, where we're desperately trying to cut down our carbon footprint, isn't using the economies of scale to get everyone using the sun to heat their water. This is one of the most successful green technologies for our climate: you have water heated to 65 to 70 degrees Celsius for most of the year.

Fitting solar hot water panels costs an average of €4,000 per house including the cost of evacuated tube solar panels (the best kind), new piping, a specialised immersion tank, and labour. For that you get a 60% average cut in your hot water bill - the largest part of your electricity bill.

But €4,000 is too much for most people at the moment; people can't commit to spending that much on one payment.

Ireland could cut our carbon footprint enormously - and give jobs to thousands of people currently out of work - if there was a State scheme which would buy the panels wholesale and hire the skilled plumbers, electricians and builders now out of work to instal them.

If economies of scale were in place, and if no corruption was involved of course, it could be possible to instal solar hot water systems in every home in Ireland for an average of €2,000 per home.

If people could then repay that money over five years on their utility bills, there would be no cost to the State, yet thousands would be returned to work and Ireland's carbon footprint would be enormously aided.

This is really a no-brainer: it won't cost the State anything, because people will pay back the price of the technology on the never-never, but will slash our carbon costs and save the environment. As well as making life a lot more comfortable for Irish households.
Posted by Pageturners at 14:33 1 comment: 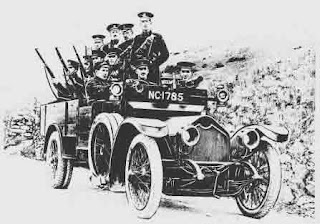 From Padraic Colum's book My Irish Year, about the midlands of Ireland in 1912 (downloadable from archive.org)