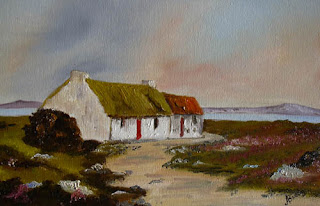 Then, the cottages of the west of Ireland looked like a handful of marshmallows thrown across the islands' fields. In the early 19th century, Irish cottages were grey, the colour of the local stone - My Little Grey Home in the West was literally true. But by the 1920s they were white, and by the 1950s they were a mixture of lovely pastels.
Whitewash was introduced to the rural areas of Ireland as a sanitary measure against the regular outbreaks of cholera and typhus and the endemic tuberculosis in the 19th century, and by the middle of the 20th century, it was a matter of pride to whitewash your home regularly; one islandwoman famously whitewashed her home inside and out once a week, removing all the furniture to do it.
The marshmallow colours came from some creative woman's discovery that food dye worked perfectly with whitewash. You could throw in a few tablespoons of the cheap food dye and tint your whitewash a tasty lavender or blushing pink or a shadowy indigo.

There was virtually no electricity then, except in towns. People ran the big old valve radios and the new TVs from car batteries. Lights were largely Tilley lamps, which gave a beautiful bluish light; the paraffin was expensive enough, so people waited through the lengthening dusk till it was dark enough to light the Tilley, then there was a ceremonial, silent, happy time of lighting it - heating the lamp with methylated spirits, then gradually pumping up the paraffin, making a fine pressurised gas, so that the light blossoms and blooms. Then the lamp was set in the window, and in each cottage one light showed across the sea, a beacon for the homecoming fishermen.
The west of Ireland has a warm microclimate because of the presence of the Atlantic Ocean and the limestone crags acting as a giant storage heater.
The traditional cottages of the 19th and 20th century were a masterpiece of insulation. Typically, the walls were two feet (60cm) thick, solid stone mortared with a mixture of sand and bull's blood, then plastered and whitewashed.
A turf fire was kept going all day, every day, winter and summer, with the embers smoored over with ash at night so it kept alight and warm under there. The cottages were built directly on the crag, and this limestone floor and the limestone walls took in the heat and radiated it gently back.
Turf was cut all over Ireland from the bogs; islanders who had no bog of their own bought púcán-loads of turf from mainland farmers. All winter, every cottage had a pile of turf stretching from the ground to the rooftop, against the cold northern gable, providing superb insulation against the winter wind and cold.
This was so universally recognised an image that Padraic Colum wrote it into the longing of his poem An Old Woman of the Roads:


O, to have a little house!
To own the hearth and stool and all!
The heaped up sods upon the fire,
The pile of turf against the wall!

All gone now. If country people have a pile of turf outside the house, it's neatly ranged against the garden wall, or sitting on the universal patch of lawn that fronts Irish rural houses' road access, outside their walls.
Other customs have gone with the turf. Then, the main room of the house - kitchen and living room - was set around a gigantic chimney. On the left, as you face the fire, was the woman's place - all women sat here, from the tiniest baby to the old, old lady whose place was on the stone bench actually inside the chimney; and on the right was the men's place. A hole in the wall on either side kept things handy for each sex: the woman's knitting and magazine or novel; the man's pipe.
Every house had musical instruments - with luck, an upright piano, but at least a fiddle or a melodeon; everyone could play a little, and many people played and sang beautifully.
Everyone also sang and whistled at work: the production of music had not yet been outsourced to professionals. Cooking was done in big pots using a crane, a device that swung the pot in over the fire and could lower it or raise it to boil or simmer or sauté. A kettle was always purring on the hob of the fire, and bread was made in a pot oven or on a griddle set against the fire - delicious smoke-scented breads and stews and roasts came from these methods.
People collected seaweed - dillisk for drying and chewing and putting in soup; the gourmet treat slabhcán - sloke or nori or laver - for rinsing and frying up with rashers; carrageen for jelly and sore throat cures. They dried fish on the thatch in the salt wind, and cooked it with milk and onions and ate it served with buttery mashed potato. The lamb and beef produced on these crags was sweet and tender. Every woman kept a few hens and ducks, so there were eggs for eating and for sale and the odd cockerel for the pot. Most people had a cow, or if there was a 'delicate' child in the house, a goat, for milk. For Christmas, people raised geese and turkeys.
All this makes the life sound idyllic. It was not; it was a lot tougher than now, with no farm or fisheries payments or dole to provide a cushion against poverty. At the time that JM Synge - himself a tuberculosis patient who defied his illness by rambling and walking all over the country - wrote about the Aran Islands, a medical investigation reported almost universal malnutrition among the islanders. 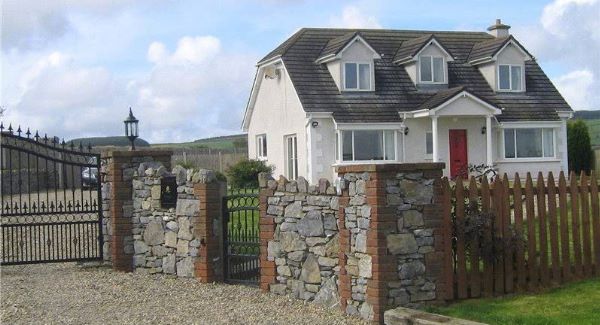 When better times came, people fled the smoky, draughty cottages and built snug, well-insulated homes with slate rooves (thatch was thought of as a fire hazard and a home for the tubercules that spread TB). They put in Stanley and Aga ranges to keep the house warm, and later oil-fired central heating. The drifting turf smoke that scented the approach to every house in the old days was gone: more efficient combustion burned even the smoke.
A whole way of life has changed utterly in half a century: now, the typical country house runs a 4x4 and a runaround, cooks on an induction hob and in a fan oven, heats with oil - though the Stanley may still be on the go.
What will the next half-century bring? A natural pessimist, I'm reminded of the famous account of a visitor to Connemara in the 18th century being feted with a board piled with good food and wine imported from France and Spain; a few years later the Act of Union sent capital fleeing from the country, and another half-century later starved creatures crawled through this countryside on their four bones.

But maybe I'm wrong. Maybe we're about to have a revival, where we build even better houses, use the land even better, and live snug and cosy and well-fed and creative and happy.
Posted by Pageturners at 14:13